T he rebellion was launched by the Society of United Irishmen, founded in Belfast in 1791. The founders were Protestant liberals seeking parliamentary reform, inspired by Theobald Wolfe Tone’s call for Catholic emancipation. Encouraged by the revolutions in France and America, they rapidly grew and developed into a revolutionary republican organisation. When France declared war on Britain in 1793, they were brutally suppressed. Their policy was to wait for French aid, but the destruction of the organisation by suppression forced an early rising in 1798. When the French did arrive, they were too few, too late.

By 1798 there were 280,000 sworn members of the United Irishmen. They were divided by sectarian distrust and political differences. The Protestants, mainly middle class Presbyterians, were struggling for an end to restrictions on Irish trade and for religious equality, while the rural Roman Catholics, were organising for agrarian reform and catholic emancipation.

In 1778/9, France and Spain joined the American War of Independence against Britain. With the regular army abroad, patriotic Irish Protestants formed the Volunteers, to defend against invasion.

There was much support in Ireland for the Americans, many of whom were Protestant dissenters from Ulster. The Volunteers began to press for reform and greater independence. To stabilise Ireland, the British government pressed the Dublin parliament to give Catholics the vote in 1793. At the same time, the Volunteers were suppressed and replaced by a home defence force of paid militias.

The well-armed but poorly trained militias formed the bulk of the Crown forces. Many defected to the rebels, along with former Volunteers. Most of the rebels lacked both training and equipment – the standard weapon was a pike, made by the local blacksmith. Most of the combatants on both sides were Irish, brother fighting brother. The campaigns were fought with a cruelty so often seen in civil wars.

The rebel leadership looked to France for support, but the timing was never right. A French force of over 14,000 men set out in 45 ships in 1796, but was scattered by winter storms in Bantry Bay. This triggered a vicious suppression in Ireland, forcing the United Irishmen to rise, without French support, in the spring of 1798.

When Humbert arrived in Killala with 1,100 men in late August, the rebellion was virtually over in the rest of the country. He was to have been followed immediately by much larger forces, but these did not set out until October.

In Ulster, the largely Protestant rebels under Henry Joy McCracken had been defeated at Antrim on June 6th, Munroe’s forces at Ballinahinch a week later.  At the seat of rebellion in Wexford, defeat at New Ross and Arklow had been followed by annihilation at Enniscorthy, at the hands of General Lake, on 21st. June.

T his was the last major engagement of the 1798 rebellion. Twelve days earlier, with 1,100 French troops and 1,500 Irish, Humbert had beaten a much larger force under General Lake at Castlebar. With Lake in pursuit, joined by Lord Cornwallis 20,000 troops from Dublin, he tried to join up with surviving rebel forces. After an overnight chase, Lake caught up with himJust north of here. Caught with his forces strung out on the road, Humbert regrouped, but was soon outflanked and forced to surrender. The day ended in a massacre of the Irish rebels, effectively ending the rebellion.

Humbert had planned to join forces with 3,000 United Irishmen he believed to be near Granard. On the night of Sept. 7th they stopped at Cloone for four hours rest. Lord Cornwallis marched to Ballinalee, to cut them off, sending orders to General Lake to attack from the rear. Lake’s advance guard arrived in Cloone, to discover that the French had left only an hour before.

Humbert’s men were spread out along the road. While Humbert waited for them in Ballinamuck, his rearguard of 200 men, under Gen. Sarrazin, surrendered after a brief skirmish ❶ at Kiltycrevagh (Croppies Gap). Humbert moved up Shanmullagh Hill with 400 men, while General Blake with a battalion of pike men and a company of French grenadiers under Capt. Jobit took up position along the road. Jobit ordered his grenadiers to attack across the bog ❷, but they sank into it and were forced to surrender.

General Lake now arrived in the valley with large forces and attacked the left flank of Shanmullagh Hill ❸. This was repeatedly repelled by a detachment of pike men.  Meanwhile, Lake sent a large detachment of cavalry and infantry around the hill, under cover ❹ to attack Humbert from the rear. Humbert was surprised by cannon fire followed by a cavalry charge and forced to surrender in minutes.

On the roadway, cannon fire was exchanged and Lake’s cavalry were repulsed repeatedly by Blake’s pike men and Magee’s cannon ❻. Blake led his men along the foot of Shanmullagh Hill for a flank attack on the road, but when he got there, Humbert had surrendered.  The rebels fought with the courage of desperation, as they realised that they were to be shown no mercy.  Many fled into the bog ❼, where the cavalry could not follow, but they were surrounded by muskets and slaughtered.

The Irish battalions on the top of the hill ❽ watched, as the French were treated with all the civilities of a formal surrender, but were themselves then set upon and slaughtered without mercy.  500 are believed to have been buried in mass graves ❾ on the hill. The following day many of the captured, including Magee and General Blake, were hanged nearby ❿ from the arms of a cart.  General Blake was buried in Tubberpatrick graveyard ⓫. 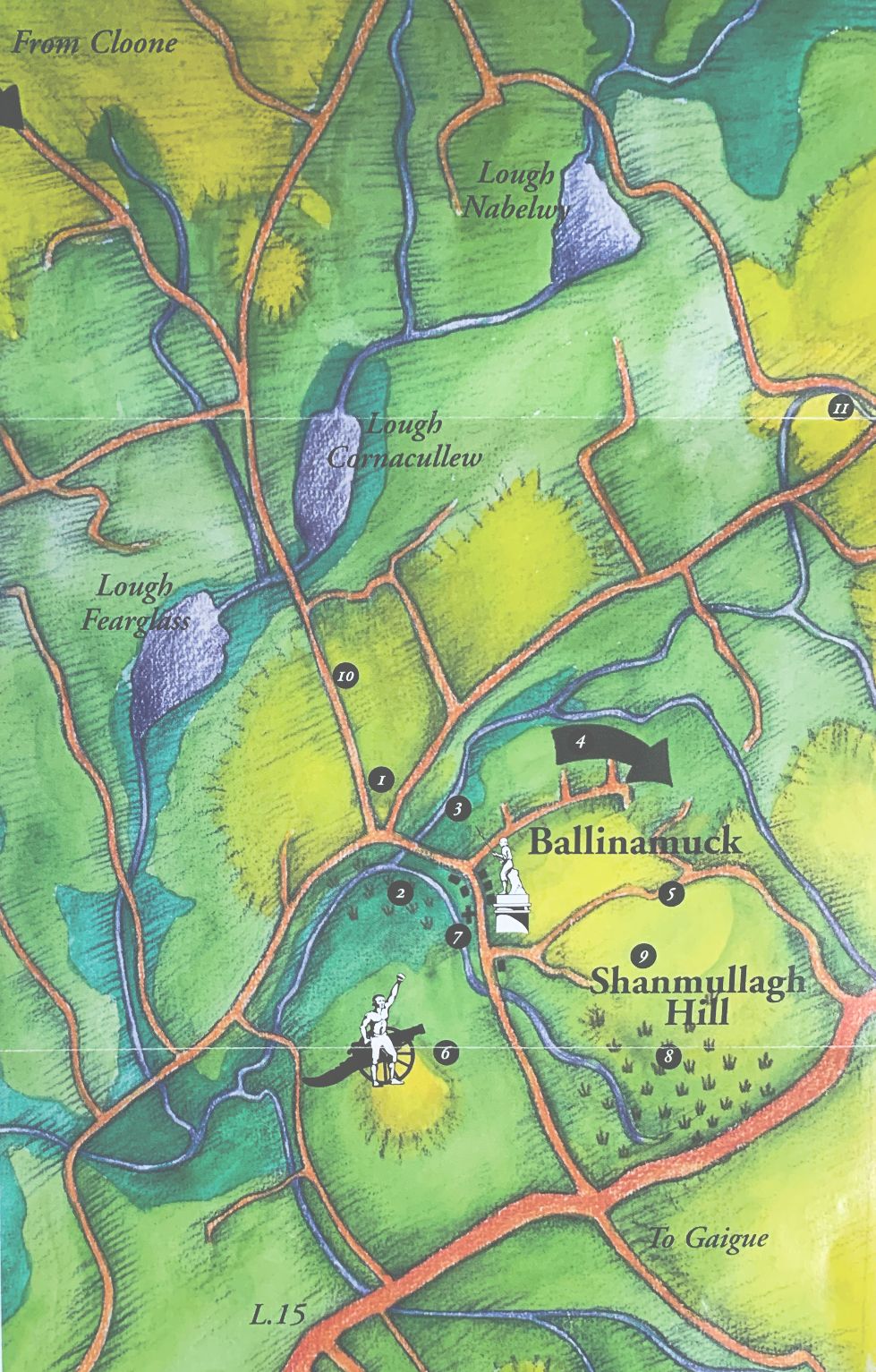 T he aftermath of this last major action of the rebellion, was marked by the same brutal suppression which had preceded it, and left a lasting bitterness in Ireland.  When the French surrendered at Ballinamuck, they were treated with all the courtesies of war.  The Irish who fought with them were given no quarter, 500 are believed to have been buried in mass graves on Shanmullagh Hill. Weeks later, Wolf Tone was captured in a Naval engagement with a French Force off Tory Island in Co. Donegal. He was taken to Dublin and sentenced to hang.

In the days following the Battle of Ballinamuck, many of the captured were executed. After a while, the army grew tired of so many executions, and began to draw lots as to who should be hanged and who should be let go.  All those who had been members of the Militias were hanged as traitors.

General George Blake faced his execution with legendary courage.  He had lost his hat, coat and boots in his efforts to escape.  He requested to be shot, rather than hanged like a criminal.  When this was refused, he asked that he be allowed to soap the rope, so that his dying would be quicker.  This he did, with his own hand, joking that he would not, as his uncle had warned him, die with his boots on after all!

Among the expeditionary force, were a number of Irish officers serving with the French army, including Wolfe Tone’s brother Matthew. Humbert was appalled to discover that these men were excluded from the safe conduct. He succeeded in arranging the escape of his Aide de Camp, Bartholomew Teeling, who was the son of a Lisburn draper. Teeling was soon recaptured and later hanged, along with Matthew Tone, at Arbour Hill.

The rebellion was lost, but sporadic fighting continued for several years. Memory of the alliance between Roman Catholics and Protestant dissenters dimmed, as nationalism and loyalism in Ireland became increasingly sectarian.  By the time one hundred years had passed, 1798 was remembered by Roman Catholic Ireland, as a glorious failure in the struggle for freedom.  Among the descendants of the Ulster dissenters who founded the United Irishmen, it was remembered as a glorious victory for Protestant loyalism. The myths of each reflected the other more accurately than they reflected historical truth. 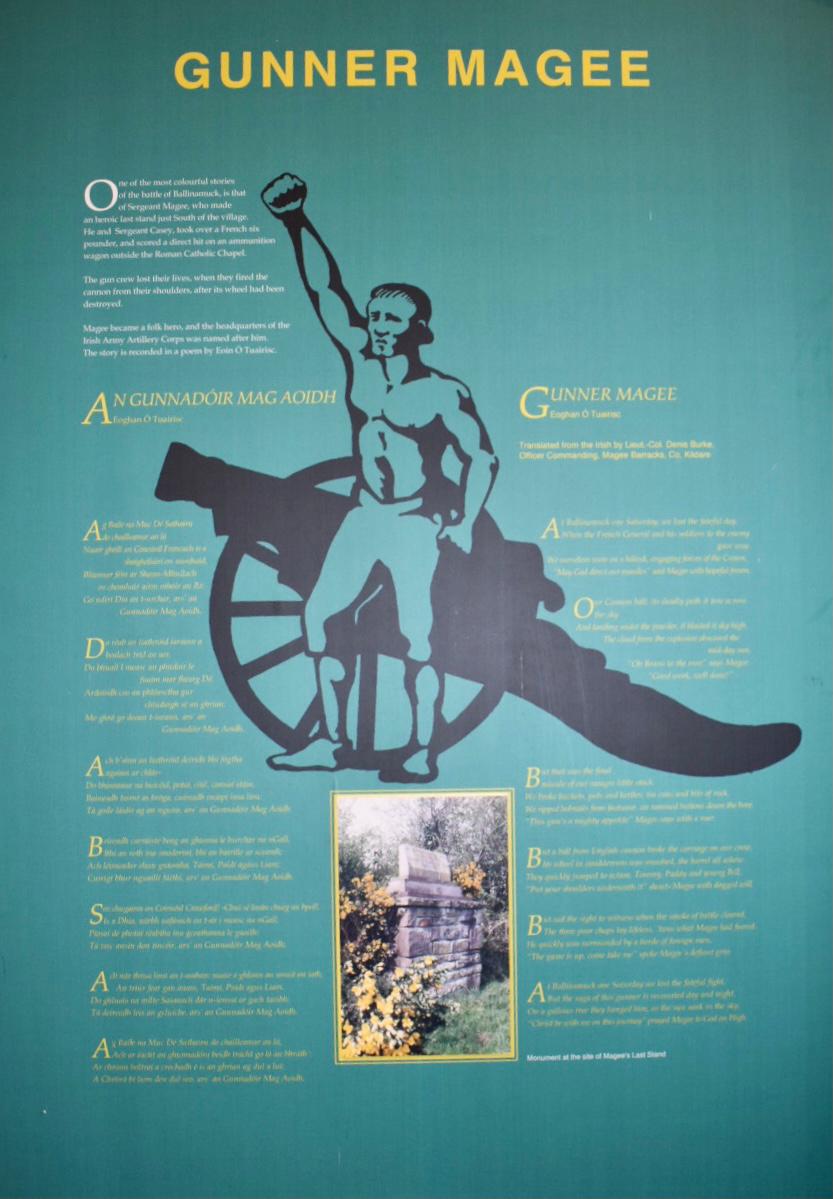